Music Institutions across Europe Open Their Doors to Ukrainian Musicians

Editor’s Note: The Global Leaders Program develops music for social impact leadership through an intensive year of learning that includes small working groups. One of the learning modules is on teaching artistry, and the culminating project for small groups is to apply what they’ve learned to designing a music project for a particular program the group has been investigating for months. The assignment is to imagine and design an interactive community event that would deepen connections between the program and a community it wants to more fully engage with. The projects were so imaginative that the Ensemble editors thought it would be interesting, even inspiring, for our readers to discover what these working groups have imagined. So, we will include one imagined project in each of the next six Baskets—in the hope that the Global Leaders’ ideas can spark your own innovative ideas for concerts that could deepen your program’s community connections. Our thanks to the Global Leaders teams and program leaders for sharing their visions of what’s possible. 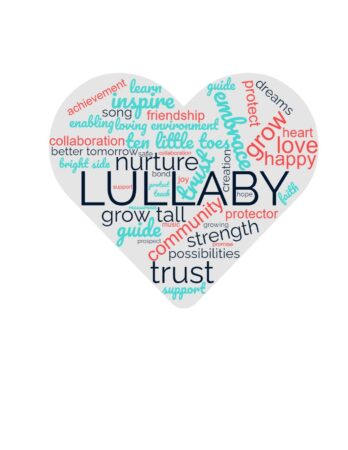 As Global Leaders cohort members, we have learned that a good teaching artist engages audience members in their own communities, creating magical moments that can endure and inspire. With that in mind, we set out to propose a community concert for Carnegie Hall’s Lullaby Project.

Beginning as a small pilot project in the Bronx, New York in 2011, the Lullaby Project quickly became a renowned family music program. Ten years later, it has touched thousands of families across the world—a decade of helping families to bond through lullaby creation, wherein love and music-making become a sort of generational inheritance.

To honor that decade, we made the number ten a common theme in our concert proposal, which we called “TEN Years of Lullabies—A Celebration.” We identified Trust, Embrace, and Nurture (or “TEN” for short) as the three pillars of the project, and our concert proposal was devised with those values at its heart—a one-hour performance of ten unique lullabies written at different Lullaby Project sites over the past decade. It was important for us to center audience members as active participants; as such, we envisioned the attendees sitting in a U shape that encouraged eye-contact and active play.

We wanted the concert to be engaging and surprising, fostering inclusive activities for audience members of any background. To create those “moments of magic,” we leaned on the Lullaby Project’s built-in strengths: a trove of original repertoire, a wealth of experienced teaching artists who are active and effective advocates, and ten years of life-changing stories the Project has helped to write. For example: for “Trust,” we suggested that attendees receive color-coded cards (on their seats) that contain ten-word stories from past participants—either written by the parent-songwriters or inspired by their lyrics. These cards could be used during the event instead of program notes: to designate different participant groups, to inspire a collaborative songwriting activity, or to be exchanged as a means of sharing stories throughout the audience. We also suggested a post-event space where these cards are displayed as part of an interactive exhibition, as well as a published collection of cards designed to engage and inspire future participants.

In tying the Lullaby Project’s stories to its music, we mean to highlight the lasting human component that makes it so special; just as its songs will endure, so too will the stories of its participants. That is our concert model’s goal: to connect people both in the moment and beyond, strengthening bonds that will last many more decades.